3 ounces of established culture that creates an instant deli container size culture. It includes medium taken directly from an active culture, several dozen worms of a temperate strain, and an unknown number of eggs. I add extra worms to compensate for any damage that occurs during shipping. Ships well year round to all but the hottest environments.

Why white worms?:
I have cultured just about everything and white worms are easily my favorite. I have kept this strain well over a decade, in my garage without any considerations, and have never had a problem. When compared to daphnia, a one gallon culture will contain 100 daphnia at most, but the same size worm culture would contain 1,000+ worms. They are very high in protein, can be gut-loaded with foods you wish to get into your fish, survive in a fish tank for weeks, productive year round, the time investment in a culture is only a few minutes each month...there are many reasons why they are my favorite. They are also one of my fishes all time favorites.

Medium:
I find most soil, peat, cocofiber, commercial bedding, and green kitchen scrub pads, all work well. I use cocofiber but don't recommend it more than other products. These products are inexpensive so try several to see what they respond best to. Medium can be the thinnest layer to several inches deep. Make it nice and wet. It may seem counter productive making a culture worm's environment so wet however, in some aspects they are semi-aquatic and they love moisture.

FYI: White worms enjoy medium that is organic rich and ‘cycled’. New medium, if adding too much, has a tendency to cause a population to significantly retract in size for several weeks. It won’t kill off a culture...just an unwanted circumstance that is easily avoided. If wanting a larger culture, add small amounts of new medium over time, or start another using a starter of worms.

Food:
Feed like any composting worm. On the menu is bread, cereal, rice, potato, and fruits & vegetables. Virtually any decaying organic matter is on their menu. It must to be soft and wet or the worms struggle ingesting it. If it’s something hard, like a broccoli stem, boil and turn it into mash.

Temperature:
There is a lot of misleading information suggesting white worms require an abnormally low temperature of 62 degrees. Enchytraeus Albidus, on this continent, ranges from Canada to Virginia, as well as inhabiting many other temperate parts of the world. Also, many of these strains have been in the hobby for decades, such as this one, allowing it to further adapt to our home environments. I have over one million worms, have purposefully pushed their upper limit for well over a decade, so in some aspects this strain has evolved characteristics different from somebody who keeps them in a wine cooler. The magic ‘62’ degree number originates from a very old study, one of the first, and on one particular strain, so it doesn’t represent all Enchytraeus Albidus. Yes, there are strains where you’d want to keep them at 62 degrees however, that isn’t suggested with this one.

My cultures reside in my garage so, depending on the time of year, culture temperatures range 40 to 85 degrees. Ideal/target range is 55 to 75 degrees. A cool location is all that is needed for this culture. For me, my garage is ideal.

Tip: If you live in a very hot area, and your home doesn’t have a cool spot to keep a culture, your cold water lines are ideal. Keep your culture in a container with a flat bottom, place that on a sheet of aluminum foil, scrunch & string that to the water line, and wrap it in aluminum foil. It will act as a heat sink drawing heat from the culture. Another way to help keep a culture cool is having a fan blowing across the medium. The medium is so wet evaporating water acts as a natural refrigerant...like a swamp cooler.

Tip: Keep in mind there is more to temperature than a red-line temperature that should never be crossed. Though my cultures can get quite warm during the day, up to 85 degrees on the hottest of days, I have reliably cool nights which gives the worms a chance to recover and go about doing normal worm type stuff. It’s the same as when you are hot for a period of time, it causes your body to expend additional energy, but your body recovers once in shelter...you don’t die.

Culture Invaders / Mites:
This is another topic with a lot of inaccurate information. Every organism we culture has its invaders, but because it's something easily visible in a WW culture, it gets discussed disproportionately, also, mites aren’t nearly the issue in white worm cultures like they are with grindals. I do mitigate mites in my grindal worm cultures but my white worms cultures are never a problem. Also, invaders are usually a non issue because they aren’t likely interested in living worms when there are worms that die naturally every day. An invasive mite is more likely providing a helpful service by helping break down the bodies of worms that die naturally.

If you do have an invader making an impact on your culture ‘mitigate’ it. How? Tap on the culture to drive the worms deep into the medium, remove the top layer of medium, and you will then have removed most of the mites. You can even eliminate them if you repeat this step frequently.

Why not keep the invaders out to begin with? There is little you can do to keep out things like mites because they are so small and start out life microscopic in size. Placing your culture in a pillowcase will keep out larger invaders, but when it comes to things the size of mites, it’s nearly impossible keeping them out. Mitigating them like I explained only takes a few moments and highly effective.

Harvesting:
Place a plastic deli container lid over their food and the worms will crawl onto it. Dip that directly into your fish tanks. This will also help keep the food moist as moisture condenses on it.

If DOA I send one replacement at no cost. Please don't file a return as that usually adds additional steps for us both - just message me it didn’t make it and I will send another without a guilt trip.

FYI: When it comes to ensuring a live delivery the most vulnerable time for a package is while it’s with your local carrier or sitting in your mailbox. It’s safest to meet the mail carrier and take the package from them directly. If placed in your mailbox it will get baked within minutes.

FYI:Distance isn’t a factor as this ships priority mail, so the package will show up as quickly as if from most areas of the country.

For the safest outcome, watch your weather forecast for cool & overcast, for the upcoming Wednesday thru Friday. For most of the trip, during any time of the year, a package is in a temperature controlled environment and fairly safe the entire trip - until your local mail carrier places it in their truck. If it’s extremely cold, hot, or sunny while they are delivering the mail, risk increases significantly.

White worms are long and can be damaged if over-handled. Don't stir or rummage through the medium after you receive it.

Add the medium into a deli size container that has a couple small holes in the lid.

I remove moisture from the medium prior to shipping so it doesn't leech water into the packaging. When in their new container add water until soggy.

Add a small piece of bread in the center.

Place your new culture in a cool location out of sunlight.

Join My YouTube Channel: The Carbon Dragon
It was previously named ‘White Worm Man’, but now is ‘The Carbon Dragon’ and being updated with fresher content. We will be covering advanced aquaria topics.
Aquatic Plants & Fertilizers / Live Fish Food Cultures / Select Fish & Shrimp

White Worm Temperatures:
White worms are actually robust to a wide range of temperatures. I can culture & harvest white worms in my garage year round without any consideration, but can only keep grindals there for a couple months out of the year.

The ideal temperature is 78 to 85 degrees. Culture temperatures safely range 65 to 90 degrees. 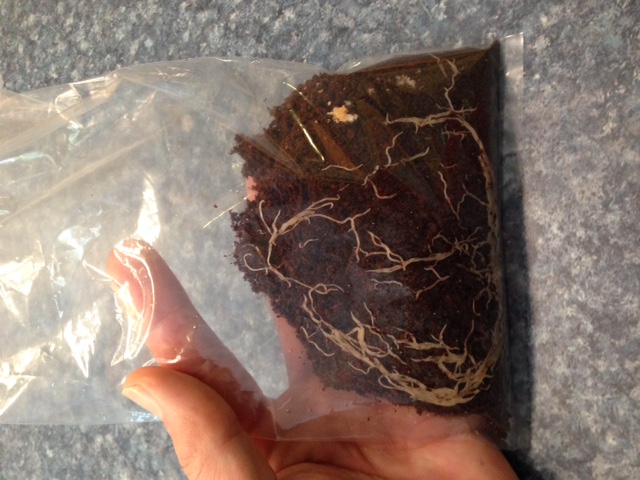